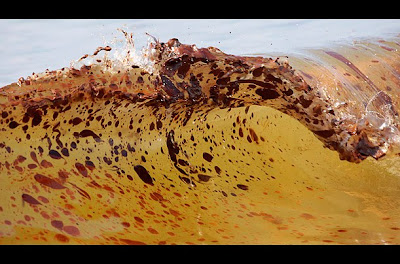 A picture of Gulf oil spill by Time magazine
We need oil, it's true... but there are places in this world, where oil drilling should never be considered, much less permitted, because the risk of damage to a unique and very vulnerable environment is just too big, consequences of the spill too awfull to even think of!
Belize is blessed with an abundance of pristine, biodiversity rich natural areas: rain forests, mangroves, wetlands and a unique Mesoamerican barrier reef - the second largest in the world.
All of it is a global legacy, sheltered for centuries by Belize's indigenous people.
Now government of Belize recklessly jeopardizes the nation's natural resources, giving away oil exploration concessions over practically the entire area of Belize, including its national parks, the barrier reef and atolls! 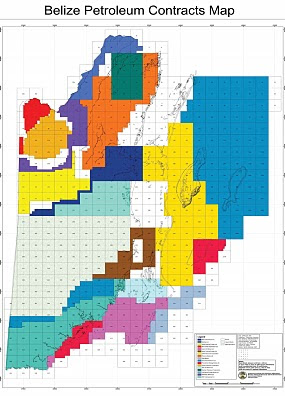 These areas are awfully vulnerable to even a small oil spill, much less a spill similar to the one created in April of this year by BP in the Gulf of Mexico.
Whether you are a birder, wanting to protect wetlands, environmentalist wanting to protect rain forests, snorkeler or diver wanting to protect the barrier reef and the atolls along the coast of Belize, whether you are an eco-tourist, wanting to enjoy the natural treasures of Belize, an expat or tourist wanting to enjoy sandy beaches and clear azure waters of the Caribbean ...
Please help Belize's indigenous people, and its civic society organizations, like SATIIM, to avert an ecological disaster in Belize NOW by: 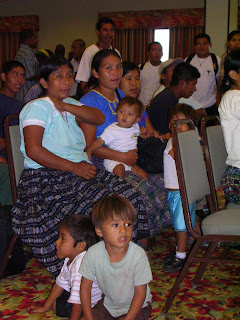 "Words can't describe my emotions. Fifteen years of work, it's an overwhelming joy to know that the justice system in this country finally begins to render the justice that those seek and I can only be extremely happy that a group like the Maya community have mustered the courage to seek justice, to seek a space, to seek a voice, in their future and the future of this country."
" I want to start off with the word that the chief justice used today in court: this is the time for reconciliation , this is the time to put the issues that have divided us apart and to sit with our government and pave a way to concretize the fundamental values that every Belizean in this country ought to enjoy. I believe that the honorable prime minister believes in those fundamental values as well and we are hoping, as the Chief Justice articulated today, that a process is established to begin to identify and develop a legislation for the protection of these lands."
Posted by SATIIM at 7:44 PM 2 comments

“The government has been engaged in a vicious campaign to discredit and choke SATIIM’s funding – the lifeline of SATIIM’s existence,” Greg Ch’oc tells World Bank

The Sarstoon-Temash Institute of Indigenous Management (SATIIM) is the only entity to so far challenge the Government of Belize in court – and successfully so – over a petroleum concession, getting the court to demand that US Capital Energy conduct an Environmental Impact Assessment before undertaking exploratory works in Toledo.

SATIIM was also among the groups that went to court to get the Government of Belize to recognize Maya customary land rights.

Executive Director of SATIIM, Gregory Ch’oc, believes that because of the stance that SATIIM has taken on these and other related issues, the Government is spitefully stifling the NGO’s funding, the current contention being a 6-month delay in getting the Government of Belize to issue a simple endorsement letter for a US$200,000 grant SATIIM won back in 2009 under Project 1401 – a sustainable forestry initiative.

Chief Executive Officer in the Ministry of Natural Resources, Beverly Castillo, told Amandala that one of the concerns that the Government has, is that the administrative expenses total about 70% of the grant, leaving very little for community work on the ground.

“That’s ridiculous,” Ch’oc responded, saying that the organization has met all the World Bank’s requirements, including keeping the administrative costs within the 20% limit of the total budget.

The Ministry of Natural Resources and the Environment is the GEF Focal Point, but the Chief Environmental Officer, Martin Alegria, has been designated as the point person, said Castillo, who added that the Government has to undertake a proper review before issuing an endorsement letter.

Castillo said that she knew nothing of the request for an endorsement letter for the SATIIM project until three weeks ago. Since then, said Castillo, she has met with Alegria and Chief Forest Officer, Wilber Sabido, and she knew of a draft letter last Friday, which would shortly be sent to SATIIM.

This, however, is not the endorsement letter SATIIM contends it has been waiting for, for the past 6 months. It is a letter with concerns the ministry wants SATIIM to address.

Ch’oc, who said that he does not want to be contentious with Government, is of the view that GOB will never issue an endorsement letter for SATIIM: “…we knew that this would have been the way the government would treat us.”

He contends that, “The challenges that SATIIM confronts today are direct results of the actions we took in the past against the government and those we are taking today. The government has been engaged in a vicious campaign to discredit and choke SATIIM’s funding – the life line of SATIIM existence.”

He explains that there are approved projects that require government endorsement, and the trend for more than three years has been that the letters have not been forthcoming. One instance he cited was an $800,000 grant from PACT around 2006/2007; another is an FAO grant for which a letter has still not been sent three years later.

We may never be able to settle with the Government; this has to be settled with the Bank, Ch’oc said.

Below is a copy of Ch’oc’s appeal to the World Bank. At press time, he had not yet received a reply:

Thank you very much for all your support to SATTIM. This letter is to formalize the request I made sent via email yesterday.

In November 2009, the indigenous communities in southern Belize were elated that their project 1401 was among the twenty six winners in the World Bank Development Marketplace competition; ‘100 ideas to save the planet’. That was almost 7 months ago and sadly we still have not been able to start the project.

Many of the great staff at the Bank knows about SATIIM. SATIIM worked with the Bank before in successfully implementing a medium GEF size grant in 2002-2005. Resulting from that support is a strong and vibrant indigenous organization that has given voice to the voiceless. SATIIM has brought on the national stage the plight of the indigenous people. We have been Engaged in innovative environmental stewardship and setting the foundation for indigenous communities future economic prosperity rooted in their vision and aspirations. Building the capacities and creating opportunities for indigenous people to engage in solving some of the chronic and intractable issues that are the causes of environmental degradation and poverty in their communities and the region. It has not been an easy process, but our communities are fortified in the conviction that we as a community have an obligation to make our contribution to save the planet.

This has meant taking concrete actions in challenging government environmental and developmental policies in the region -demanding good governance to ensure the deepening of our democracy. Government fragmented economic development agenda for the region is not consistent with the need to address climate change and moreover totally disregarding the aspiration of the Maya people.

You may be aware that in 2006 government granted oil exploration license in the region without requiring Environmental Impact Assessment (EIA). After exhausting options to have government reconsider its permit so that it complies with the Environmental Protection Act (EPA), SATIIM file lawsuit in the Supreme of Belize. The result, the government’s permit squashed and the company forced to conduct an EIA as required by the EPA. In 2007 and after two decades of negotiations with government to resolve the land tenure insecurity of the Maya communities, SATIIM and other Maya organizations file land claims lawsuit in the Supreme Court of Belize. The precarious nature of the indigenous communities land tenure arrangement has significantly contributed to the environmental, economic and human rights concerns that we are addressing.

The challenges that SATIIM confronts today are direct results of the actions we took in the past against the government and those we are taking today. The government has been engaged in a vicious campaign to discredit and choke SATIIM’s funding – the life line of SATIIM existence. We have projects that have been approved to us that require government endorsement – some of these projects have been approved three years ago, and despite government agreeing to provide the endorsement letter to the donor, they have not done so. This is what is happening now in the case with the development marketplace project 1401.

We provided all documents to the government over 6 months ago. We have been calling them regularly and we get the run around. Last week the deputy environmental officer via a telephone call informed one of my staff, Lynette Gomez, that the government has some issues with budget allocation and others in the proposal. We requested from the government to send their concerns to us in writing and despite agreeing to send us, we have not received anything. Our efforts in trying to get the endorsement letter for over 6 months have not resulted in any letter. How much longer should we wait? The letter will never come.

1.) Why does the Bank place condition like this one after a project has been approved?

2.) Not that the Belize Government concerns are valid, I am positive they are not. My concern is how will the Bank reconcile issues raised by a third party, a party not involved in the initial process, that the Bank deliberately invite to have a say in the process at the end?

Considering the undue stress and the unfair condition made after the project approval, I am requesting that the Bank remove as a condition of the grant, the letter of endorsement from the GEF focal point of the Government of Belize, so that we proceed to sign the grant agreement quickly.

In concluding, we knew that this would have been the way the government would treat us. But we are guided by the conviction that our work is for no ordinary cause, it is a great cause, and a just cause. We would not have done our work any other way. Doing nothing would mean embracing the status quo – one of injustice, discrimination, poverty, and environmental degradation.

I hope you understand the situation we find ourselves in and reconsider removing the condition that could continue delaying our work with the communities in the region.

I thank you for your continued support.