PM Barrow announces that drilling will go ahead in Sarstoon-Temash National Park and wrongly states that such action is in keeping with the law
Today, Prime Minister Barrow today hosted his first quarterly news conference of the year. The two hour long event commenced harmoniously and he soon pleased the public with an announcement that there will be no new taxes. He then dropped a bombshell.

"the Government has no intention in stopping the exploration process, especially not in the Sarstoon Temash Park... US Capital energy  is no more than 6 to 9 months away from actually beginning to drill. And certainly when they reach that point drill they will'

A public outcry is sure to ensue. Outraged, SATIIM is trying to set the record straight. Joining forces with numerous organisations including APAMO, the Belize Coalition to Save our Natural Heritage and the Mayan Leaders Alliance, we are working to highlight the laws in place to protect areas such as the Sarstoon-Temash National Park and the intention of the Government to ignore them.
The statement made by PM Barrow demonstrates his complete disregard for the laws that are in place to protect our country and its people. He claimed that in the 2006 Supreme Court Decision regarding SATIIM v the Government of Belize, the Court decided the "legality of drilling… was perfectly consistent, perfectly in order". This is a fabrication and shows he has gravely misinterpreted the decision. To go ahead with the oil drilling in Sarstoon-Temash National Park (STNP) would be illegal.
To clarify, in 2006 the Supreme Court ruled that seismic testing could go ahead, in keeping with environmental regulations, as 'scientific research’. At no point did this judgment allow for drilling to take place in STNP, even for exploratory purposes. Under the Environmental Protection Act, an Environmental Impact Assessment (EIA) would have to be conducted. Only 'seismic activities associated with the exploration phase' were addressed by the EIA that was completed in 2007.
Since the judgment of 2006, SATIIM has been working with local communities and associated organizations to ascertain how development can be approached to best benefit every Belizean. It is calling for the Government to make decisions in line with the law of our country and with the support of all Belizeans.
Posted by SATIIM at 8:38 AM 0 comments

'To drill for oil is contempt of court' Maya leader states

The Mayan Leaders Alliance speak out against oil drilling in the Toledo District and declare their defiance to protect their lands.
Cristina Coc, member of the Mayan Leaders Alliance was interviewed on national radio yesterday, 9th February 2011.  She called into question the legality of proposed development in the area and called for public support in the protection of the land and Mayan rights.

"We have been seeing... concessions being granted on Maya land, particularly in areas in Southern Belize that have been named by the Supreme Court as lands that are used and occupied by Mayan people. We thought that it was necessary... to point out that Government has no legal authority to allow oil activity on our lands, particularly because of the injunction that was granted by the Supreme Court on June 28th of last year.

"If permission was given and Companies began to drill for oil or there was any activity, the Government would be in contempt of Court. And we would certainly make sure that we follow through with that. It would be violating the orders of the Supreme Court of Belize.

"We are not saying no development or no exploration. What we are saying is that for any of these activities to happen, whether it be drilling for oil, whether it be any kind of resource extraction, or any kind of development on lands that our people live, it has to be a situation where both Government and the Maya people make those decisions together and sit at equal ends of the table. It can't be that Government makes those decisions without informed consent of the people or without any kind of agreement between both parties. We have to begin to sit together and come to some kind of resolution.

"We'd certainly like to also expect support along with the Environmental Organization, to help in championing the cause against oil exploration in protected areas. We feel that it's not just Mayan Land. It's also those areas that have been protected. So we stand in solidarity with organizations like APAMO...  we feel that as Maya people we've always stood against social injustice, and we agree with them.  We agree that it's time for us to stand up with the people and resist where there is an injustice."

A complete transcript of the interview is available at Love FM
Posted by SATIIM at 7:06 AM 0 comments

Will your family be living next to a polluting oil field?

This map shows the vast amount of our nation that has been sold to corporate giants seeking our resources for their wealth. Petroleum contracts have been given by Government in all but the few remaining white areas. Everywhere else, petroleum operations are currently going ahead.
We must act to stop this now. Soon, it will be too late. 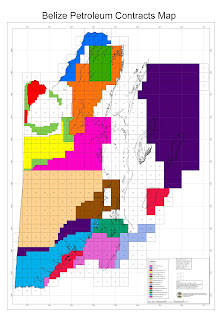